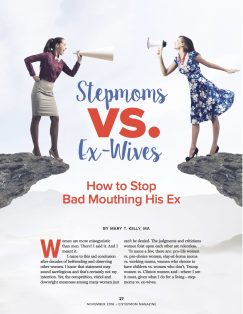 Stepmoms vs. Ex-Wives: How to Stop Bad Mouthing His Ex
by Mary T. Kelly, MA

Women are more misogynistic than men. There! I said it. And I meant it.

I came to this sad conclusion after decades of befriending and observing other women. I know that statement may sound sacrilegious and that’s certainly not my intention. Yet, the competition, vitriol and downright meanness among many women just can’t be denied. The judgments and criticisms women foist upon each other are relentless. END_OF_DOCUMENT_TOKEN_TO_BE_REPLACED

Step Aside, Stepmom: Sharing the Spotlight With Their Mom by Claudette Chenevert

During the cycle of life, we encounter many major milestones that transform our families. They force us to interact with people we may not be excited to stand alongside, including mom. Stepmoms sometimes dread the most significant milestone moments, in which the occasion is inevitably shared with their stepkids’ biological moms: graduations, weddings and babies. END_OF_DOCUMENT_TOKEN_TO_BE_REPLACED

Dearest Wife,
I’m a little lost here, as to where I fit in. As the man of the house, I feel an obligation to contribute. But, regardless of what I do, I’m in the wrong.

I can’t just stand by and let your kids walk all over you. END_OF_DOCUMENT_TOKEN_TO_BE_REPLACED

The April 2016 issue of StepMom Magazine is HERE!

We know you’re going to love this month’s edition! The articles are designed to help you tackle the specific challenges that come with loving someone who has kids. This month you’ll learn:

* how to deal with a high-conflict ex
* 4 secret power moves to help you become a happier stepmom
* what to expect if you’re expecting
* tips for parenting his kids and yours (together!)
* the differences between custody and residency
* how to accept the universal truths about stepfamily life
…AND MUCH MORE!

Parenting Tips for Stepmoms: My Kids + Your Kids = Parenting Together by Christina Roach, LMHC, NCC, DCC

The 1970s TV sitcom “The Brady Bunch” presented a skewed view of stepfamily life. Despite the fact that Mike and Carol Brady each brought three children into their marriage, they never seemed to argue about how they parented each other’s kids.

Whether they were interacting with their biological children or their partner’s, everyone simply seemed to get along. And any antics that did surface were nicely resolved by the end of each episode. END_OF_DOCUMENT_TOKEN_TO_BE_REPLACED

Tips for Understanding Your Stepkids – Start the New Year off Right! by Claudette Chenevert

While living through the separation and eventual divorce of their parents, our stepkids experienced a lot of insecurity. Where would they live? Who would they live with? And for how long? At the time, they were (and probably remain) understandably scared, unsure, angry and distraught at losing control over nearly every aspect of their lives. END_OF_DOCUMENT_TOKEN_TO_BE_REPLACED 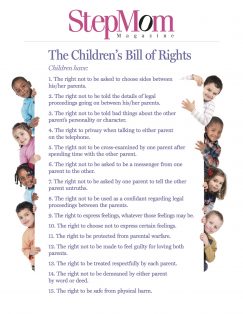 Children’s Bill of Rights – A Reminder on How to Keep Kids Out of the Middle by Lara R. Badain, ESQ.

Marriage is a contract between adults. When marriage ends, the divorce or separation should also be between the adults. However, the decision to end a marriage can, and usually does, have a significant and long-lasting impact upon the children. Parents have a responsibility to conduct the divorce proceedings in a manner that protects their children as much as possible from their conflict. Hopefully, doing so will help reduce the potential long-term emotional and psychological impacts of divorce. END_OF_DOCUMENT_TOKEN_TO_BE_REPLACED

Same Sex Stepfamilies: To Be, Or Not to Be, in the Closet? by Trisha Ladogna

The U.S. Supreme Court ruling that the Constitution gives same-sex couples the right to marry and Caitlyn Jenner’s public transition are both tremendous milestones which pave the way toward legitimizing and accepting same-sex and transgender stepfamilies.

There is a lot to celebrate, not only for those who identify as members of related communities but also for those who gave birth to, grew up with, befriended or love someone who identifies as gay, lesbian, bisexual or transgender.

These massive steps forward, however, have not eliminated the challenges faced by lesbian stepfamilies. END_OF_DOCUMENT_TOKEN_TO_BE_REPLACED

Stepparenting Together? How Stepmoms’ and Stepdads’ Experiences Differ by Trisha Ladogna

Have you ever wondered if stepdads have it easier?

Becoming a stepmother after spending time as a single parent means parenting like you have never experienced it before. You have the unique experience of beginning your stepparenting journey at the very same time, in the very same place, as your partner.

While this can open up some fantastic opportunities for shared understanding, insight and support (in your couple relationship), it also brings with it a unique set of challenges found only when there are two stepparents residing in the same home. END_OF_DOCUMENT_TOKEN_TO_BE_REPLACED

Getting Your Partner to Listen – Stepmom Strategies: Stop Harping and Be Heard by Mary T. Kelly, MA

⊲ “You need to tell your kid to clean his room.”

⊲ “I need you to set your ex straight on our boundaries.”

⊲ “You need to start disciplining your kids or I’ll do it for you.”

Do you recognize yourself in any of those statements? In truth, that list could go on and on. I’ll bet you’ve started multiple conversations with your partner by saying, “You need to …,” I want you to …,” or some variation of that. END_OF_DOCUMENT_TOKEN_TO_BE_REPLACED