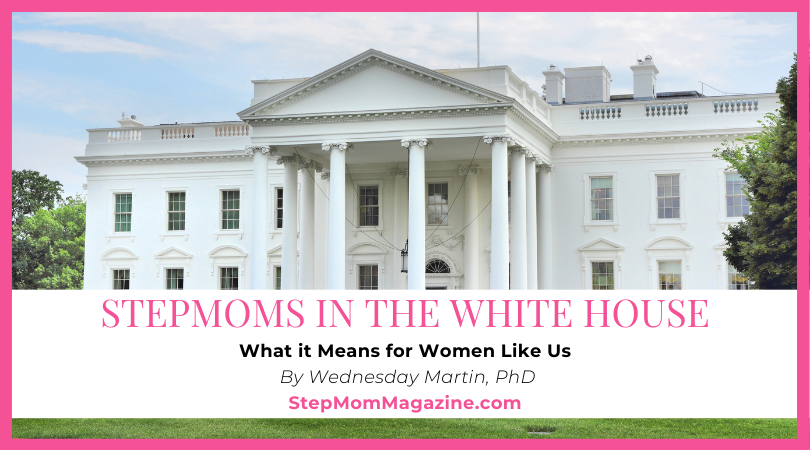 Stepmoms in the White House
What it Means for Women Like Us
By Wednesday Martin, PhD

The U.S.’s current First Lady, the wife of its President-elect and its incoming Vice President are all women who’ve partnered with men who brought along kids from previous relationships. And it’s about time!

Stepfamilies now outnumber what so-called experts used to and sometimes still call “intact” families, as if stepfamilies (statistically the new normal) are inherently broken or ruptured in comparison. We’re not. We’re just a bit or, in some cases, a lot more complicated. So what?

Finally, We Rule!
Those of us in the U.S. are as American as our flag. And it’s beyond time we—by that I mean stepfamilies and, in particular, women with stepkids around the world—had some high-profile representation. But let’s talk about how representation begets expectations, including unrealistic expectations which have the potential to be very damaging.

Notice I didn’t call us “blended” families, stepmoms, bonus moms or even stepmothers once so far? Families and women with stepkids will call ourselves whatever feels right and comfortable, as well we should. It’s best if each of us selects from the admittedly-charged and highly-personal array of present day nomenclature as we see fit.

However, as a woman with stepkids who’s also a social scientist who researches and writes about relationships, I’m obliged to describe those I write about accurately and to do them no harm. I avoid descriptors such as “blended,” which could contribute to engineering unrealistic expectations and thus might be especially exhausting for or harmful to women who are more likely to feel obliged to make unrealistic things happen.

I also use language which acknowledges that many of the women I interview and write about have stepkids yet may not overtly identify as stepmothers. Instead? They frequently describe themselves as people who “happened to marry someone with kids.” Another reality? Many people with stepparents don’t like the label “stepchild.”

These realities are just that: realities. More often than not, they’re due to circumstances beyond the control of the woman with stepkids. It’s time for mainstream media outlets to catch up and have both some respect for our arrangements and some understanding of our challenges. It’s also time for them to:

• Stop telling us to “blend” already.
• Stop insinuating we’re failures if we don’t.
• Stop tearing us down as if we’re wicked if we have a bad day.
• Stop expecting us to be stepmartyrs, always putting our own well-being and feelings last.

Fair & Equal Representation
Which brings us back to the discussion of representation and expectations, including the word “Mamala”—a mashup of Kamala and the Yiddish word mamelah which Doug Emoff’s kids are said to affectionately use when addressing and referring to the woman their dad married.

It’s sweet and playful. In addition, it sidesteps the freighted, “Am I their mom?” issue in a way we know is less likely to exacerbate loyalty binds for children of any age. The Biden/Harris campaign cannily messaged about Harris’s competence, warmth and cultural relevance by adopting the nickname into its repertoire.

Its haymishe (or homey) coziness stood in distinction to the reported struggles for power between comparatively glamorous Melania Trump and her stepdaughter Ivanka. Some journalists wrote about their “fight” for proximity to President Trump as if it were unusual. Hah! Anyone who’s studied stepfamilies or lived in a stepfamily knows that dynamic and the tensions it stirs up are more like the norm.

Unlike a lot of us, however, Jill Tracy Jacobs didn’t rush blindly into partnering with a man who had kids already. As she’s explained in numerous interviews, she knew it was a huge responsibility and wanted to be sure she had it in her. This is the opposite of what people ignorant of stepfamily realities tell us to do: “Oh, you’ll fix it all and love ’em just like they’re your own!”

Romantic Notions Be Damned
It’s easy to romanticize partnering with a man whose wife has died or even a man who’s divorced; to see ourselves as saviors and to capitulate to the gender script that, as women, it’s our destiny and our obligation to swoop down, step up and salvage a tragic situation. And, likewise, to imagine that we can magically repair sadness and dysfunction just by being there with our good intentions at the ready. But we all know that’s a set up for stress—or even failure.

I’m grateful to Biden that she’s not shy about sharing her hesitations. Admitting she wasn’t sure she wanted to marry a guy with kids is another way of saying that the feelings and needs of the woman-considering-life- with-a-man-with-kids indeed do matter just as much as anyone else’s.

What’s unfortunate is that this—the idea that a woman with stepkids should not be expected to surrender herself to the role entirely or at all and that it’s OK if she wants to simply think of herself as a woman who married a guy with kids—is still a radical notion. In spite of how realistic her story is, Biden’s had to endure messaging that “she came in and saved us” along with the pressure of hearing, “She’s our rock!”

She’s just like us in this regard. How about letting stepmothers be people first? In this case: an English teacher, a runner, a wife, a mom and someone who’d still be admirable even if her stepsons hadn’t fallen in love with her and insisted, “Dad, we we think it’s time to ask Jill to marry us!”

It’s Your Chance to Push Back
We’re lucky to have this chance to push back against all the treacle and judgment that too often come into play when we talk about and advise and, yes, judge women with stepkids. Or when we simply look at families which don’t conform to mainstream (yet dated) expectations of what a family is. Ignorance can cause real pain and damage.

Many Black women in interracial partnerships with men with kids from previous relationships, for example, have reported that they’ve been mistaken for their stepkids’ nannies or chaperones. One such woman told the story of being at her White stepchild’s birthday party at which several White moms assumed she was the person driving the shuttle between party locations.

Living at the intersection of racism and retrograde beliefs about gender roles, Black stepmoms often experience extra stress; too often, even when working with therapists who don’t understand the specificities of their dilemmas.

We can only speculate what Kamala Harris—who is biracial and a woman with stepkids in an interfaith marriage—has gone through in this regard and about how her position as U.S. Vice President might help not only Americans but people worldwide think more deeply about who we women with stepkids actually are and are capable of being.

Women with stepkids are in the spotlight as never before. Here’s hoping this means we have a chance to be seen as whole people rather than “replacement parents” or clichés. And that, increasingly, we’ll see arrangements formed through re-partnerships with kids or adult offspring for what they are: contemporary, relevant, diverse and utterly normal.

WEDNESDAY MARTIN, PHD, is a social scientist, cultural critic and No. 1 bestselling author who believes stepmothering is a feminist issue. Her book “Stepmonster” is considered a go-to for stepmothers, adult stepchildren, therapists and others seeking a candid, thorough and interdisciplinary resource on the topic. Wednesday’s work has appeared in “The New York Times,” “The Atlantic,” “The Journal of Sex & Marital Therapy” and elsewhere. Her book “Primates of Park Avenue” is available in 20 languages and “Untrue” explores female infidelity. Visit WednesdayMartin.com and follow @wednesdaymartinphd on Instagram or @wednesdaymartin on Twitter.