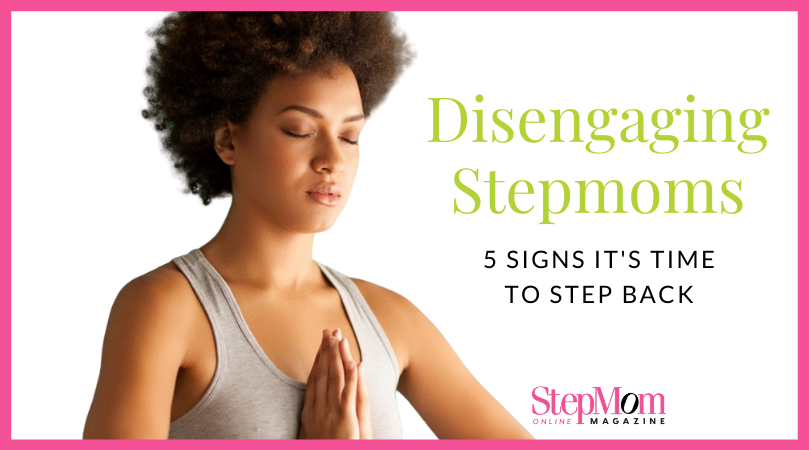 By Brenda Snyder, LCSW Originally published in the July 2013 issue of StepMom Magazine.

Many stepmothers begin the commitment phase of their relationships with an engagement ring. Women who love men with children hear the statistical improbability of successful remarriage and dismiss it, knowing in their hearts that theirs is the love that will beat the odds. They excitedly embrace their new family and put every effort into making their inner reality match what is actually happening in the home they are joining.

Here are five signs it might be time to disengage:

⊲ You feel angry and resentful a lot of the time. When your sincerest and most loving intentions are met with an absence of enthusiasm at best, and apathy or scorn at worst, bitterness can seep into all the places where love used to live.

⊲ You are more invested in changing your stepchildren’s behavior than their father is. Even if you and your partner agree on most parenting points (and chances are you do not), when you are the parent spending the time and energy required to enforce rules, require hygiene and instill discipline, a dynamic often occurs where your partner abdicates his parenting responsibilities.

⊲ You frequently realize that you’re requiring things of yourself that are not appreciated or desired. Stepmothers often run themselves ragged trying to fill what they see as their appropriate role. Unfortunately, the expectation they have of themselves is often very different from what their stepchildren want, and so angry and resentful stepchildren result and already fragile relationships suffer.

⊲ You’re spending more energy on being a stepmother than on being a wife. Ultimately, your relationship with your husband is the most important one you have in the stepfamily. It is the one that will be left when the kids are grown and starting their own families, and if your marriage is to survive it’s imperative that you prioritize it appropriately.

⊲ Your self-esteem is wrapped up in your relationships with your stepchildren. Overinvestment in your role as a stepmother your stepchildren’s behavior or in how others perceive you in your family role is a sure path to a disintegrating self-image, anxiety or depression—and a broken relationship.

“Disengaging isn’t some nasty, hostile tit-for-tat. It isn’t, “You let your kids treat me badly, eff you, I’m not doing anything for you or your kids anymore.” Disengaging is a thoughtful, planned strategy in which a woman who is partnered with a man with kids hands parenting and caretaking responsibilities back to him in an attempt to improve herself, her partnership and her relationship with his kids.” –Wednesday Martin, PhD

WHAT IS DISENGAGEMENT?
One definition of the word disengage is “to break off action (as with an enemy).” In your darkest moments, your stepchildren probably do feel like the enemy. The good news is that appropriately disengaging can eventually improve these relationships.

First and foremost, disengagement requires you to step away from the responsibility of raising your stepchildren. Many stepmothers believe that they must buy into the impossible dynamic of loving stepchildren exactly as they do or would love their own offspring. This fragile premise, then, should dictate a stepmother’s loving willingness toward all things parenting. Once a stepmother is hooked into this flawed thinking, the perceived or actual tasks and investment inevitably ensue. The problem, obviously, is that the stepchildren don’t have a similar paradigm and do not expect themselves to love or even like their stepmother. The stepmother is stuck with the impossible assignment of attempting to “mother” children who already have a mother. 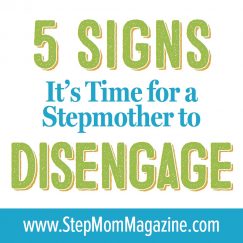 Women often want to come back in their next lives as husbands. Holidays happen, schedules are kept, groceries appear in the refrigerator and meals on the table, bills are paid and life just clicks along—with no apparent effort at all from the man of the house. Having usually been married or partnered before, husbands are often used to having their lives handled for them, and it just doesn’t occur to them that the role their former wife had in the household is not also appropriate for their current wife. Our culture has not yet developed a healthy perspective on a stepmother’s role, so the husband’s point of view, combined with the perception that a good stepmother is one who behaves exactly like a mother minus any expectation of reciprocal positive feelings from her stepchildren, results in a stepmother redoubling her efforts at every sign of inevitable failure.

Refusing the responsibility of raising your stepchildren starts with an internal shift. You won’t successfully disengage until you change the way you perceive yourself in your family. When you become able to be invested only in matters that directly involve you, peace of mind follows. You can divest yourself of the concern that your stepchild’s bad behavior or lack of hygiene reflects on you. You can require respect without needing affection. You are able to return your focus to your marriage and other things outside of it—career, friends and hobbies—that defined you before you took on your stepmother job.

Your disengagement will result in your husband picking up the ball. When a stepmother is doing the parenting job, it allows her husband to step back from the responsibility. It might not happen as quickly as you would like, but if you quit doing the job he will eventually pick it back up. He won’t parent they way you would, or even the way you would want him to, but a disengaged stepmother has the ability to tolerate it.

Disengaging means you give yourself the choice to opt out of certain tasks. If you really don’t want to go to your stepchild’s 64th softball game this month, don’t. If you don’t want to spend your entire vacation with your stepchildren, make other plans so your husband and his children have time together. If you hate cooking but have felt obligated to provide the evening meal for the 543rd night in a row, go out to dinner with your girlfriend. They won’t starve. I promise!

⊲ It is not your responsibility, nor is it within your ability, to overcome perceived or actual flaws in your stepchildren’s mother’s parenting style.

⊲ Your stepchildren are your husband’s responsibility. Unfortunately, he may not parent them the way you think he should.

WHAT IF MY HUSBAND DOESN’T LIKE IT WHEN I DISENGAGE?
Um, yeah, he probably won’t. Why would he? His life goes along really well when you do all the work!

⊲ Lovingly explain to your husband why it is necessary for you to step back from your current role in order to strengthen your marriage. Don’t make it about his shortcomings or your stepchildren’s behavior. Talk with him about how your negative feelings are impacting your relationship with him, and that your desire is to carve out a role in the stepfamily in which your marriage can thrive.

⊲ Empathize with him about the adjustments that will be required. Be supportive of him as he takes over certain tasks and responsibilities. Be appreciative when he is willing to try out new things in the family.

⊲ Keep the lines of communication open. Regularly review how things are going. Make sure you tell him when you start to feel better. When you are able to be more positive about his children, act on those feelings by complimenting them or by praising them to your husband.

⊲ Be clear about your need for his support in requiring respectful behavior toward you. You might not be trying to be the kids’ mom any more, but you are worthy of every bit of respect that your husband’s wife should get, and he needs to ensure this happens. Work on gently pointing out times that your stepchildren don’t acknowledge your presence or are blatantly rude, and ask for your husband’s support in putting a stop to it.

⊲ Remember that you are still an adult in the household. You and your husband need to agree, behind closed doors, about rules and expectations. You are a 50/50 partner in all facets of your relationship—except parenting his children. Work out ways for you to maintain expectations without engaging in arguments or discipline. Having clear consequences for rule violations is a good way to avoid fights. If your husband won’t enforce the rules, stay out of it to the extent that it doesn’t affect you. For example, if a stepkid forgets a vital homework assignment at your house, it’s up to your husband to either take it to him or let him get a lesser grade; you don’t even need to be involved in the discussion.

⊲ Decide with your husband about how much to tell the kids. Depending on their ages, it might be appropriate to let them know that you won’t be doing certain things for them anymore, but that other arrangements are made for them to still get their needs met. Your behavior will reinforce it more than a discussion, though. If they ask you about a ride to or from some event, or wonder where their clean soccer uniform is, simply and politely refer them to their father.

Disengagement is not an act of desperation, and you don’t have to be on your last nerve to give it a try. Emotionally healthy women who are committed to their partners often eventually realize that disengagement is their best bet for lasting happiness. 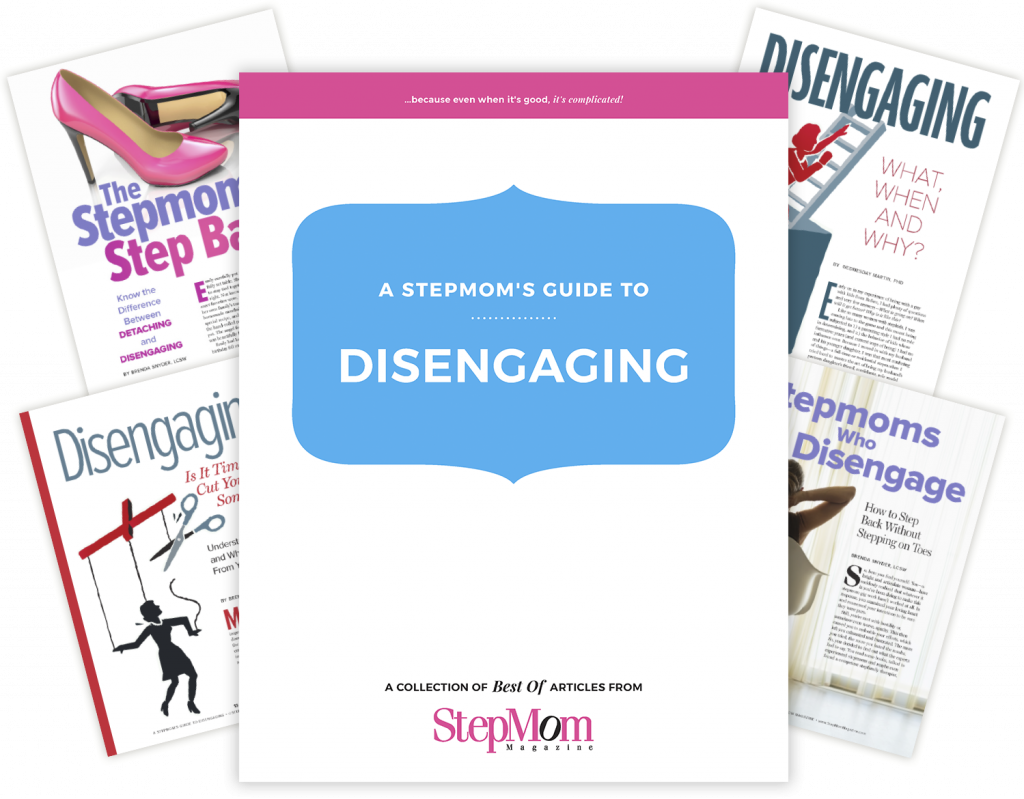 287 thoughts on “Disengaging Stepmoms: 5 Signs It’s Time to Step Back”