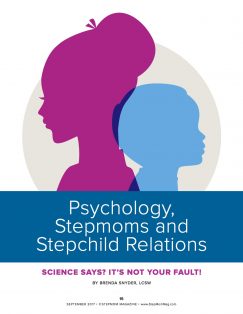 Many stepmothers share a common frustration—a thwarted desire to be close to their stepchildren. In her current experience, a stepmom might feel angry or be resentful of a horribly behaved stepchild who is perhaps disrespectful and undisciplined.

In discovering the narrative of her stepfamily, however, it becomes fairly evident that back in the beginning stages the stepmom envisioned their relationship much differently.

Most stepmoms foresee a loving relationship with the children borne of the men they love.

They become hurt and angry only after their concerted efforts are proven fruitless.

For some answers to the extent of the challenge stepmoms face when trying to form relationships with their stepkids, we might look back to child development theory and the pioneering work of John Bowlby, MD.

A psychoanalyst whose work became prominent in the 1960s, Bowlby studied early attachment patterns in children aged 0 to 2 years. Through his work, he arrived at the conclusion that human beings are innately programmed to form attachments to others and that this attachment is necessary for survival.

He believed that attachment behaviors are instinctive and are activated by conditions which seem to threaten the achievement of proximity: separation, insecurity and fear. Bowlby further believed that the attachment to one primary caregiver (usually the mother) during an infant’s first two years of life was paramount to a person’s future ability to form healthy relationships.