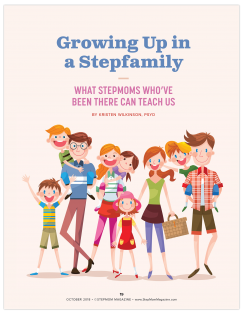 Growing Up in a Stepfamily
What Stepmoms Who’ve Been There Can Teach Us
BY KRISTEN WILKINSON, PSYD

There are a number of unique challenges stepmoms undeniably face. Those challenges are different for full-time stepmoms, stepmoms with young stepchildren and stepmoms with biological children. Yet, what about stepmoms who grew up with stepparents of their own? Does this change how they view the stepmom experience—as adults?

Find out, as you hear from stepmoms who grew up in stepfamilies.

Stacy was 8 when she first became a stepchild. She’s now 42. Her biological parents divorced when she was 4. She eventually gained one stepmom and two stepdads. While growing up, she lived primarily with her mother. This was most often the case when her mom was single. Stacy is now a stepmom to two teenage boys.

Madi was 6, when she became a stepchild. She’s now 26. She has had one stepmother and two separate stepfathers. (Her biological mother was married three times.) She lived primarily with her mother until age 16, when she moved in with her father and stepmother. Now a stepmom herself, Madi has one stepson.

Claire’s parents divorced when she was 6-months old. She became a stepchild at age 3 and has had a stepmom for 38 years. The two, she said, share a “wonderful” relationship. Her stepdad was in her life for 20 years, until he divorced her mother. Now 41, Claire has been a full-time stepmom for more than 8 years. Her stepson is 16.

Here are their stories—real, raw and unscripted.