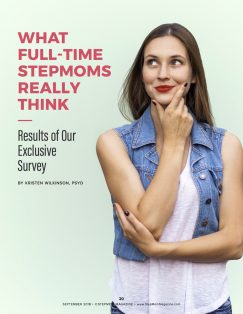 I sat inside Panera Bread early one morning, glancing at my laptop. The room was chilly. Outside it was damp and rainy. I felt as though I couldn’t drink my piping hot coffee quickly enough to wake my body and my brain. As I tried to focus on the task at hand, I noticed a woman sitting in a booth near mine. She looked young—maybe 30.

She had a small child with her, whom she doted on and fed a spoonful of oatmeal. Maybe it was too hot? Either that or the girl decided she didn’t want any more, flicking the spoon away before screaming. I’ll admit I was annoyed—my foggy brain still struggling to concentrate— but I also felt empathy for the woman’s embarrassment. Then it happened.

“You’re not my mommy,” the girl yelled at her. “You’ll never be my Mommy!”

The woman’s face turned red. She rushed out the back door with the child, leaving the oatmeal behind. I thought: “Gosh, she’s a stepmom!” How had I, someone who writes about these things, mistaken her for a biological mom?

Full-time, 24/7 stepmoms have all of the responsibilities of biological parents but face unique challenges. When stepchildren act out, these women struggle to soothe them despite the inevitable backlash: “You’re not my mommy.” Ouch!

As a result, StepMom recently set out to survey full-time stepmoms. Women from across the U.S.—149, in total—reached out, wanting to share their stories with us and with you. They opened up about everything from discipline and relationships to big mistakes and best advice: The good, the bad, the ugly.

Many said filling out the questionnaire was therapeutic and insightful. Others said it prompted them to have difficult conversations with their partners. What follows are representative responses. Their ages range from early 30s to late 40s. On average, most have at least one stepchild and one or two biological children (including ours babies).

A majority are married, hold jobs and/or hold down the fort. Whether stepmoms for six months or 12 years, most said their stepkids’ moms are “barely” in the picture. Others still have been in and out of court several times over custody issues. Each full-time stepmom who spoke up is passionately aware of the challenges she faces. …To read the rest of this article, log in and download the September 2018 issue. Don’t have an account? Click here to subscribe.