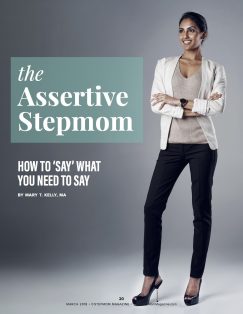 The Assertive Stepmom
How to ‘Say’ What You Need to Say
BY MARY T. KELLY, MA

American Singer/Songwriter and Guitarist John Mayer won a 2008 Grammy for “Best Male Pop Vocal Performance” for his rendition of “Say” (2007), which originally appeared on the “Bucket List” film soundtrack. I find the song wonderful and wise.

When you’re a woman partnered with someone who has children, there’s a lot you’d like to say. Still, you leave lots of things unsaid.

I imagine the same is true for your partner. Human beings almost all universally resist simply saying what they’d love to say, or feel a need to say, out of fear that they’ll incite conflict, create misunderstandings, be judged, expose their true selves or risk rejection.

Maybe you’re thinking, “I tell my partner what I’m thinking all the time. No problem here!” Hmmm, I wonder if that’s really true. I know you may have vented, vomited, accused, blamed, pointed out, lectured, condescended or let your partner have it. But that’s not what I—myself, or by way of those song lyrics—am talking about.

It’s very possible you’ve repressed, buried, dismissed or devalued your feelings … staying quiet for one or several of the reasons I mentioned earlier. In the last days of their lives, many people lament the time they wasted by focusing on petty and superficial things. Among their regrets are that they weren’t simply truer to themselves.

Why wait until the end of your life to suddenly start talking from your authentic self?

Here and now you can begin to learn how to stand up, speak up and advocate for yourself. It’s called assertiveness and it’s something most of us didn’t learn to do growing up. …To read this article, log in and download the March 2018 issue. Don’t have an account? Click here to subscribe.