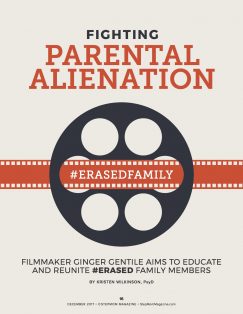 We all have our guilty, reality TV pleasures. I mean, how exciting was it that Meghan King Edmonds of Bravo’s “The Real Housewives of Orange County” was featured in StepMom Magazine in March 2016? Those of us who then watched the show over the summer saw one of its other stars open up about the impact of divorce, as Tamra Judge spoke at a gala in support of the documentary film “Erasing Family.”

Judge talked about her experiences—as a child of divorce,

as an alienated divorced mom and as someone who participated in the making of the film—saying, “Divorce does horrible things to families. Every single day it hurts.” I found her public appeal against parental alienation moving and heartfelt.

One thought on “Erasing Family: Inside the December 2017 Issue”