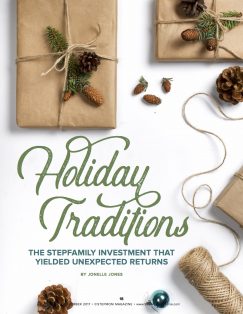 When I first became a stepmom, the word “tradition gave me the same fuzzy feelings it always had. It wasn’t until we’d traversed our first few important events and holidays before the word began to make me feel uncomfortable. I realized—unwittingly—that traditions, in a stepfamily, weren’t as simple or as magical as they had been my whole life prior.

A bit of back story is in order. I’ve been in the stepmom role for more than six years.

My husband has four kids from his first marriage: two girls and two boys who, when I came into the picture, ranged in age from 3 to 8. Our early years were filled with chaos both from having four energetic kids around and from our own ignorance of stepfamily dynamics.

It was hard work and it was exhausting. Like a lot of stepmoms, I soon realized that things would never be what I had expected. I found myself letting go of some prior expectation every single day. Back then, learning the truth about tradition was no exception and it was difficult for me. I enjoyed the comfort of traditions—the emotional closeness and meaning they provide.

In my new stepfamily, however, it went something like this: My husband and his kids had their own history, which included memories of past traditions from a broken first family of which I was not a part. Us? We had chaos. Not only did we have no shared traditions. There was added pain and discomfort surrounding holidays or special occasions, which isn’t present in first families.

Despite this unexpected plot twist, I felt a strong need to at least try and create something that I could hold onto—that we could hold onto. In her book on redefining celebrations, “New Traditions” Author Susan Lieberman writes: “Family traditions counter alienation and confusion. They help us define who we are; they provide something steady, reliable and safe in a confusing world.”

I decided to vest myself in developing our own traditions, even if it felt weird and messy.