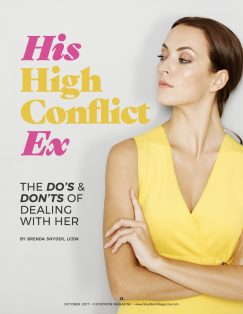 His High Conflict Ex: The Do’s & Don’ts of Dealing With Her By Brenda Snyder, LCSW

Having been a stepmother for almost as long as I have been a licensed clinical social worker, I feel quite qualified to unequivocally state that the mental health workers’ bible—the American Psychiatric Association’s “Diagnostic and Statistical Manual of Mental Disorders” (or DSM)—is incomplete.

Shortly after I met my husband’s ex-wife for the first time, I looked up “Bat-Shit Crazy” (BSC). It’s not in there. Even therapists who are not stepmothers are usually aware of another condition which is similarly recognizable but embodies such a unique combination of traits that it, too, lacks its own DSM code.

It’s High Conflict Personality. Yet, unlike BSC, HCP is a real thing.

“If they don’t get their way, there is hell to pay,” says Registered Social Worker Gary Direnfeld, MSW, of those with high-conflict personalities.

Direnfeld notes that the term was coined by High Conflict Institute President and Public Speaker Bill Eddy, in 2003, to refer to a person with whom every conversation is a challenge and every problem-solving exercise a competition.

HCPs are always right and quick to blame, if they are on the losing end of anything. The condition overlaps DSM-recognized mental health diagnoses like Antisocial, Borderline, Narcissistic and Histrionic Personality Disorders. Considered Cluster B disorders, these are extremely difficult to treat.