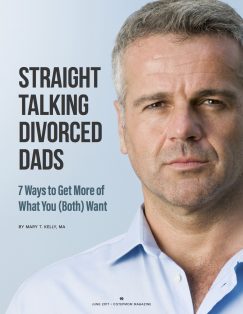 Straight Talking Divorced Dads: 7 Ways to Get More of What You (Both) Want by Mary T. Kelly, MA

Are you a man who hates conflict? You’re not alone. I’ve coached men for 15 years—good and earnest men—95 percent of whom avoid conflict with their partners. If you’re one of them, read on. Honesty is the quickest way to get more of what you (both) want!

Maybe you dread the thought of a two hour talk-a-thon, should you two disagree. If there’s even a hint of dissent in the air, it may feel safer to say, “Fine.” Happy wife, happy life. Right? Could be. But your desires and opinions matter just as much as hers.

That lone note to self can keep you from surrendering on every point.

Maybe you avoid conflict because you’re tired and it’s not worth the fight. Or because you don’t feel strongly about a given point, despite the knot in your stomach that says otherwise. Why not agree with her? You’ll do what you want anyway. Despite any promises you’ve made:

Hmmm. Why else avoid conflict?

♦ You hate feeling tension in the air.
♦ You’d rather move onto something else.
♦ You’re not even sure what the big deal is.
♦ Half-hearted agreements don’t seem to help.

Say your partner nags you about getting after your kids when chores aren’t done. She asks you to confront them about leaving their dirty clothes or dishes around the house. So, you say, “I’ll talk to them.” But you know you won’t. Instead you clean up after them, when she’s not around. It may feel easier that way, but this strategy rarely works.

She finds out and says, “We need to talk.” It’s quite the conversation starter.