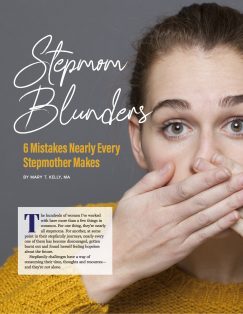 The hundreds of women I’ve worked with have more than a few things in common. For one thing, they’re nearly all stepmoms. For another, at some point in their stepfamily journeys, nearly every one of them has become discouraged, gotten burnt out and found herself feeling hopeless about the future.

Stepfamily challenges have a way of consuming their time, thoughts and resources— and they’re not alone.

Here’s a sampling of some of the comments I’ve heard from them, time and time again:

⊲ “I wish I knew this six years ago, when I married my husband. He has four kids.”

⊲ “I really could have used this information 10 years ago, when I first became a stepmom. It would have saved me a lot of heartache and misery.”

⊲ “If I had known all of this before I started living with my boyfriend and his kids, I would have waited a lot longer to give up my own apartment.

If you feel the same way, you’re about to find out that you may have been tripped up by one (or more) of the six mistakes stepmoms most commonly make. These blunders often contribute to feelings of depression and burnout.

No matter what … and then reality humbled you. But, in reality, you don’t have to keep repeating those mistakes. It’s time we face the most common errors women dating, living with or partnered to someone who has children make—and learn something from them! …To read the rest of this article, log in to your account and download the March 2017 issue. Don’t have an account? Click here to subscribe.