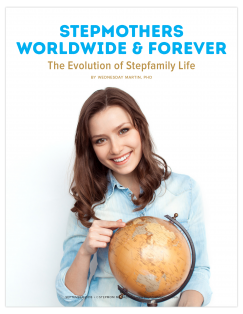 Labor Day brings with it family BBQs, back-to-school lamentations (by the kids) and back-to-school celebratory fist pumping (by parents and stepparents). Transitions and family, however we define it, are likely on our minds. This fall we also experience the energy generated by upcoming political primaries. If history repeats itself,

in the next weeks and months we may well hear politicians and opinion-makers try to prove their heartland allegiances, earn their “American as apple pie” stripes and garner popular support by talking about how the “demise of the family” (aka divorce and remarriage with children and childbirth and childrearing outside of marriage) is a “sign of the decline of our society.” They will, as ever, talk about “getting family life back on course,” as if we have swerved from a previous, simpler and, the implication goes, more righteous and “traditional” path. Even people who consider themselves forward-thinking and enlightened might talk about “contemporary families” as if stepfamilies or unmarried couples with kids from previous relationships are somehow essentially and intrinsically “modern,” a sign of “changing times.” Then there are the women and men in repartnerships or remarriages with kids and the kids themselves who sometimes feel like the odd families out—second-best or somehow “abnormal.”

There’s no doubt that divorce can be difficult, painful, and messy for the adults and children involved. And there’s no question that templates for “the family” have changed since the 1950s, when it was nuclear family uber-alles. Yes, statistics from longitudinal studies do tell us that, at least initially, kids of divorce generally have more social and emotional problems than kids whose parents don’t divorce. And it is indeed a sad fact that repartnerships with kids are more vulnerable to dissolution than first marriages or partnerships (experts tell us 60 to 72 percent of remarriages with kids end in divorce, while 49 percent of first marriages do).