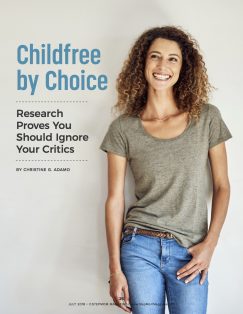 Childfree by Choice: Research Proves You Should Ignore Your Critics By Christine G. Adamo

I was recently privy to a convo between two women with similar yet different childfree experiences. Both were childless-by-choice, never wanting kids of their own. While Claire had longed to foster or adopt, both of her ex-husbands balked at that option. They were bent on biological—or nothing at all—hence their ex-ness.

“It seems egotistical to me,” Claire said. “What’s so special about having kids of your own? I don’t get it and I can have kids. I come from a long line of fertile women.”

At that, Beth raised her glass, “I hear ya!”

“I’m one of five,” Claire added. “My mom was one of seven. My sister has four kids. Growing up in a houseful of personalities drove me crazy. I never wanted to inflict that chaos on someone else.”

“It’s good you’re not a stepmom after all,” Beth told her. “Personality clashes and conflict are a way of life. I can barely cope now. Just imagine if I’d brought my own kids into the mix. Then there’s the probing: ‘Don’t you just love them?’ and ‘Aren’t you gonna have kids?’”

“No one’s ever asked me that,” Claire admitted, genuinely puzzled, “not even my parents. People say that?! I’ve never gotten past ‘girlfriend’ status with the divorced dads I’ve dated and that’s fine by me. Either their exes somehow had it out for me or the guys were too wimpy to set boundaries.”

“Sounds to me like you’re choosy,” Beth assured her.

Both sighed before moving on to another topic. And, so, it goes. Childfree-by-choice or childless-by-circumstance, women seem to get backed into a corner. If you don’t want kids of your own, something must be wrong with you. If you do want kids of your own but can’t have them, people expect you to be happy simply being a stepmom.

I can relate to Claire, which got me thinking: What is it about being happily childfree that irks other people? How can a decision based on personal freedom be met with such criticism? After doing some research, I found out that being shamelessly childfree is possible. In fact, there’s plenty of reason to applaud the childfree among us. …To read the rest of this article, log in and download the July 2018 issue. Don’t have an account? Click here to subscribe.