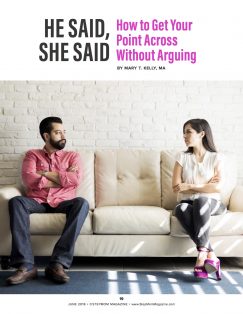 HE SAID, SHE SAID: HOW TO GET YOUR POINT ACROSS WITHOUT ARGUING BY MARY T KELLY, MA

Both stepfamily couples and first family couples come to my office with the hopes of being heard. Each partner gives me their own side of the story and then looks at me expectantly, as if I’m a referee who’s going to give a decision in one of their favors.

She says: “I’ve told him—over and over again—what needs to change. Nothing happens.”

He says: “Why bother talking to her about how I feel, when it ends up being a two-hour argument that gets us nowhere?”

They’re often surprised when I finally pipe up: “It’s not necessarily the content that’s important; it’s the way you’re delivering the content that’s all messed up here.” In my of office, there are and will always be conversations about:

There will be conflict and there will be life changes to deal with. Life is more than happy to present new and challenging circumstances, which require us to talk about and negotiate existing problems … so we can move on and start addressing a whole new slew of complications.

Your lives are busy. Integrating non-biological members into a family has turned out to be much harder than either of you thought it would be. It was supposed to be easier than this. You try to talk about it but, between bouts of talking over one another, nothing gets resolved and you go back into your separate corners to stew about how your partner “just doesn’t get it.”

Women are hard-wired to process relationships. It’s in their genetic makeup. Men are hard-wired to provide solutions. They like to get that done with as few words as possible. Women use lots of words because they don’t feel heard. They repeat themselves, several times, hoping to get their points across. What they don’t know is that their partners stopped listening at the 10-min. mark.

She says: “He’s not meeting my needs, though I’ve repeatedly told him what I need him to do.”

He says: “She repeats herself over and over, so I’ve just learned to, ‘Yes, dear,’ her to get the conversation to stop.”